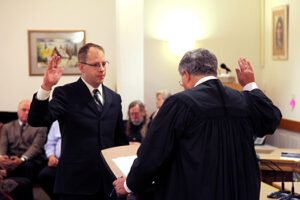 A veteran of the U.S. Marine Corps, Rob Glassmire served as a reservist in the infantry and artillery from 1999 to 2005. In 2003, he was deployed in a mortuary affairs unit to Iraq to support Operation Iraqi Freedom. His job, difficult and noble, was to ensure that all marines who died in action were returned home. Rob is seeking a second term as Garfield County Coroner in 2022.

With a background in law enforcement and investigations, Rob is an experienced death investigator and understands the importance of finding answers for grieving families during the most difficult days of their lives.

Rob is certified with the American Board of Medicolegal Death Investigators which is a rare accreditation among rural coroners. He is currently working to achieve credentialization with the International Association of Coroners and Medical Examiners.

“If I had a democratic opponent, the difference would be political opinion. I believe in limited government and oppose government intrusion in my life as well as attempts to limit my constitutional rights,” Rob said. “In my job as a ‘person of the government’, I am cautious every day as I work with families who have suffered the death of a loved one to make sure I don’t do anything that creates an intrusion on their lives, violates or limits their rights.”

The job of coroner is demanding and exacting. Rob is always “on call.” When he’s not in the office, Rob can be found mountain biking or skiing with at least one of his kids. “That is of course, as long as I remain within cell phone coverage.”