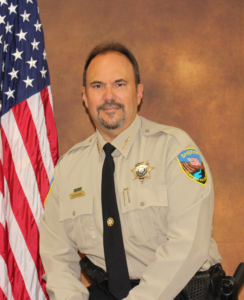 A resident of Garfield County since 1986, Lou Vallario is a law enforcement veteran. Pleased with his performance, citizens have elected him to the position of Garfield County Sheriff for the past 20 years,five terms. Currently, Lou is running unopposed for a sixth term in 2022.

He attributes his success and that of his department to consistently hiring the right people for the job over the years. Those ongoing efforts have built the Sheriff’s Office into what it is today.

In his upcoming term, Lou plans to continue adding to that strong foundation constructed over the past two decades. Top priorities include maintaining continuity within the Sheriff’s Office, continuing to foster professionalism in the department and fighting to keep our constitutional rights. Lou firmly believes in preserving, supporting and defending our independent way of life in Garfield County without government intrusion in every aspect of it.

Due to the negative impact of democrat leadership at the state and national levels, the county is seeing declining revenues as prices spike across all sectors of the economy. As a result, Lou strives to strike a balance between budget and services, with citizen safety a first and foremost concern. “As sheriff, I have to adjust the size of the organization and the services we can provide while maintaining public safety as our number one priority.”

When Lou is out relaxing with his wife, kids and grandchildren, except for scuba diving, you can find him enjoying Garfield County’s many recreational opportunities including horseback riding, camping and fishing.