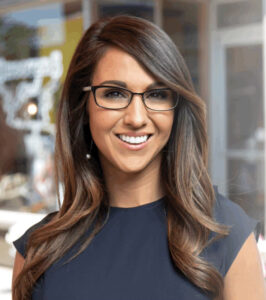 U.S. Congresswoman Lauren Boebert is a conservative champion in Congress, serving as a member of the Executive Board and Communications Chair of the House Freedom Caucus. Congresswoman Boebert works on the issues that matter most to rural Colorado and serves as the Vice Chairman of the Congressional Western Caucus.

A 35-year-old citizen legislator from Rifle, Colorado, she never held public office prior to her 2020 victory and is the first woman, first mother, and youngest ever to represent the District. Congresswoman Boebert was the proud owner of Shooter’s Grill, a Second Amendment and Western-themed restaurant in Rifle, Colorado where staff open-carried. In Congress, she is a champion for the Second Amendment and has an “A” rating from the National Rifle Association and Gun Owners of America.

Representative Boebert was raised in a Democrat household on welfare. Her senior year of high school, she earned an opportunity to serve as an assistant manager at her local McDonald’s. She made the difficult decision to drop out of school to help put food on her family’s table, realizing she could provide better for herself than the government ever could.

Congresswoman Boebert is active in her church and spent years as a volunteer, counseling and assisting at-risk women at the local jail with reentering society and becoming contributing members in their communities.

Congresswoman Boebert’s most important job is being a mother to her four boys.

When the Biden administration announced a new Disinformation Governance Board to censor conservatives and silence free speech, Rep. Boebert introduced legislation and led the successful effort that resulted in new Truth Czar Nina Jankowicz resigning and this unconstitutional board being abolished.

Rep. Boebert put America first by introducing a bill and leading a successful pressure campaign that resulted in the Biden administration dropping its plan to give illegal immigrants separated at the border $450,000 checks while simultaneously firing Border Patrol agents.

Rep. Boebert filed an amicus brief defending the Second Amendment in the Supreme Court case of New York Pistol and Rifle Association v. Bruen. The Court ultimately agreed and struck down unconstitutional may-issue concealed carry licensing regimes. This was the biggest legal win for the Second Amendment and individual rights in decades!

When the Biden administration canceled important services for our veterans visiting their national memorials, Rep. Boebert helped secure an important victory that resulted in Honor Flight services resuming for our nation’s heroes.

Rep. Boebert stood for the Second Amendment and got red flag laws, provisions to draft our daughters, and other woke provisions removed from the National Defense Authorization Act.

Congresswoman Boebert worked to get important pro-life protections including the Hyde and Weldon amendments signed into law. They will prohibit taxpayer dollars from funding abortions and protect doctors, nurses, and healthcare providers from being forced to provide abortions against their consciences.

Rep. Boebert introduced the I-70 Detour Act to alleviate the burden of I-70 shutdowns on communities surrounding the I-70 corridor and to ensure commerce for the West Slope doesn’t come to a screeching halt every time I-70 shuts down. Specifically, her legislation requires the Secretary of Transportation to identify and prioritize funding for identifying repairs and alternative routes to I-70 in order to reduce traffic, increase safety, and improve rural Colorado’s resilience.